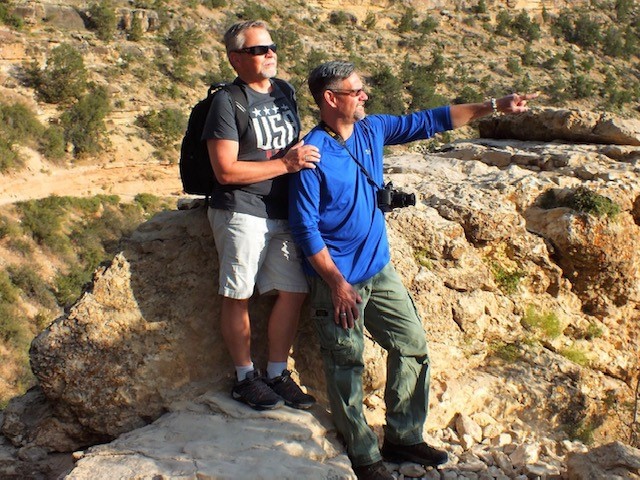 Tucker and his husband, Billy Connelley, enjoy exploring the world.

What led you to the specialty of hospice and palliative medicine?

I think it happened organically over a period of years early in my private practice medical career. My undergraduate degree was in social work and biology, which tells me now that an interprofessional career was in my DNA. After graduating college and then medical school, I was in private practice internal medicine for a decade. During that time, I realized how poorly trained I was for ambulatory practice with complicated elders and those with serious illness(es). During those early years in practice, I started using a lot of home health for my patients who were asking for home evaluations for safety, med checks, social evaluations, physical therapy, etc. I had moonlighted in my residency with a local hospice, and so, in the mid-1990s, when the home care company noticed how many referrals they were getting from this young internist, they approached me about helping them start a hospice in exchange for paying for my training and board exam and more. From that point, I self-studied and trained, learned all of the hospice regulations, and led remote interdisciplinary teams from all over the state while they grew the hospice. Ultimately, it became one of the largest providers of hospice care in our state. By that time, I had decided to move into academics to have a broader impact on what I saw as inequities in serious illness care. I happened to know Drs. John Shuster and Amos Bailey, who were building programs in Birmingham, AL, where I was located, so the rest is history, so to speak. They took a leap of faith and hired an internist with interests in non-oncology populations. I joined the Center for Palliative and Supportive Care in 2002, where I have been ever since. There were very few opportunities for fellowship training at the time I started, so I am a "grandfather" in original palliative care board terminology.