In June, Andrew W. Gurman, MD, outgoing president of the American Medical Association (AMA), spoke to the hundreds of physicians, residents, and medical students gathered in Chicago for the AMA Annual Meeting. “For our colleagues out there who had not yet realized the importance of advocacy,” he said, “well, I hope 2017 has been their wake-up call.” He was, of course, referring to efforts to repeal the Affordable Care Act. Gorman went on to review AMA’s priorities for health system reform, noting that “each of us has a crucial role to play in creating a healthcare system that better delivers for our patients.”

Reflecting on his year at the helm of the Board of Trustees, Gurman went on to update the attendees on how the AMA was “working in the trenches” to fix what matters to physicians, including fighting anticompetitive insurance mergers, successfully advocating for reduced reporting burdens under the Medicare Quality Payment Program, and creating a coalition with 16 other organizations to reform the prior-authorization process. In his remarks that followed, AMA Executive Vice President and CEO James L. Madera, MD, highlighted initiatives he said paint a picture of leadership that defines the AMA. These include the STEPS Forward™ practice-improvement modules, MACRA Action Kit, Accelerating Change in Medical Education Innovation Consortium, and healthcare tech incubator MATTER, which the AMA cocreated. He stressed that the AMA’s “partnerships with specialty societies are central to shared success.”

Fourteen years ago, Dennis S. Pacl, MD FAAP FACP, submitted a report to AAHPM leadership after attending the 2003 Annual Meeting as the Academy’s first AMA delegate. He detailed the testimony he offered on policies under consideration by the House of Delegates (HOD), including one on “End-of-Life Drug and Pain Treatment,” and relayed that he’d reached out to counterparts onsite to gauge interest in forming a council that could bring together stakeholder specialties to speak with one voice on policy matters related to supportive care. He ended his report noting that “we can use the AMA as a powerful tool for the needs of our constituency.”

Today, the Pain and Palliative Medicine Specialty Section Council (PPMSSC) is a reality, comprising nine specialties—including pain medicine, clinical oncology, rheumatology, and addiction medicine—and led by AAHPM’s delegate Chad D. Kollas, MD FACP FCLM FAAHPM, who recently was re-elected to chair the body. At the June meeting, the PPMSSC considered AMA policy on issues such as gaps in prescription drug monitoring programs, advance care planning, safe storage and disposal of opioids, Medicaid coverage for substance use disorder, and physician aid in dying. Advocating for policies that support patients with serious illness in testimony to reference committees, the Academy’s delegates routinely seek Section Council support to amplify their voice, forming strong alliances. Kollas points out that “in leading the Section Council, the Academy is not only able to influence AMA policymaking on issues of importance to hospice and palliative medicine, but also to build key working relationships with other medical specialty societies that pay dividends outside the AMA.”

Having a “seat” in the HOD also affords AAHPM representation on other key AMA bodies, such as the Opioid Task Force and the Advisory Committee to the AMA/Specialty Society Relative Value Scale Update Committee (RUC), a group that recommends values for new or revised CPT codes to the Centers for Medicare & Medicaid Services.

“Our involvement at the RUC has proved invaluable,” says Phil Rodgers, MD FAAHPM, who serves as AAHPM’s RUC Advisor. “The Academy has been able to help present key evidence to support the advancement of new CPT codes for advance care planning and complex chronic care management services. Now, representation on the CPT-RUC Emerging Issues Workgroup will enable AAHPM to help define and value the physician and team work involved in delivering high-value, nonprocedural services and develop a CPT strategy for alternative payment models like the one the Academy recently proposed.”

“It’s been vital to have AAHPM represented on the AMA Opioid Task Force,” adds Kollas. “Our presence ensures the unique needs of patients with serious illness are considered as member organizations craft policy recommendations and develop guidance for physicians and other healthcare providers. Sharing AAHPM members’ experiences has helped the Task Force understand the value of policy that balances efforts to stem the opioid crisis with maintaining reasonable access to these medications for patents with legitimate need.” 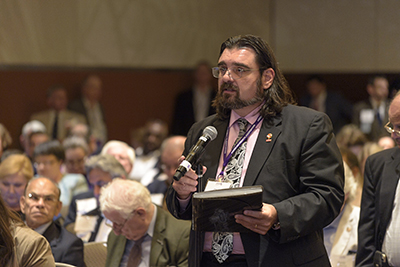 Remaining ‘At the Table’

AAHPM’s continued leadership at the HOD and representation on AMA committees and task forces is dependent on the Academy having 20% of its members also belong to the AMA, along with meeting other criteria for specialty society membership. This threshold is assessed every 5 years, with the Academy next up for review in early 2018. It will be critical for AAHPM physician members to join or renew their AMA membership in the New Year, according to AAHPM past president Ronald J. Crossno, MD FAAFP FAAHPM, the Academy’s alternate delegate. “The AMA is one of the few places where hospice and palliative medicine routinely interfaces with the rest of health care, with all the opportunities that affords.”

Crossno realizes some AAHPM members may question the value of the Academy’s involvement. “The AMA HOD is much like Congress. It may not always do what you want, but it really and truly is the only voice that matters,” he says. “Not having representation from AAHPM would be like a state boycotting Congress. Your issues would have no representation at all.”

Kyle P. Edmonds, MD, is the Academy’s delegate to the AMA Young Physicians Section. “Those who criticize the AMA seem to forget it is made up of individual physicians working together to find a common path,” he adds. “Over the last 12 years—since I was a first-year medical student—I have been involved and have worked to shape the AMA, including spending 2 weeks a year at the in-person meetings trying to make things a little bit better for patients and my profession. I hope my AAHPM colleagues will see the value in the work we delegates do to make the AMA as representative as possible.”

In the midst of high-stakes health system transformation, Dr. Kollas believes it’s more important than ever for AAHPM to play a role in influencing AMA policy and advocacy messaging. “For better or for worse, the AMA is the voice of medicine in the eyes of federal policymakers, and it also works closely with state medical associations, whose efforts influence state laws and regulations that increasingly impact the practice of hospice and palliative medicine.”

“We all know the saying, ‘If you’re not at the table, you’re on the menu,’ adds Edmonds. “AAHPM members can help ensure that hospice and palliative medicine remains ‘at the table’ simply by joining the AMA or renewing their membership when the Academy is assessed for continued representation.”

Jackie Kocinski is AAHPM’s director of health policy and government relations. Contact the Academy’s public policy team at This email address is being protected from spambots. You need JavaScript enabled to view it. .

Go to the table of contents to read more articles.